This article is a stub - you can help by expanding it. See the Wiki FAQ. 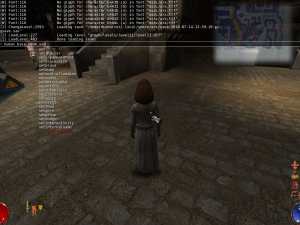 Arx Libertatis 1.2 and newer comes with a console that can run arbitrary script commands.

In debug builds and development snapshots the console can be opened by pressing Script console (`).

In release builds the following cheat spell opens the console:

You do not need to have the runes to cast this spell. Casting the spell once unlocks the console, after which it can be opened using the normal hotkey.

Some commands are listed on the wiki.

Others can be discovered using the console's suggestion and auto-complete features or by browsing the source code.

Script commands can be preceded by an entity ID followed by a period (.) to specify the context for the command. If no entity is specified, the player entity will be used.

The console implements a number of features and readline-like hotkeys common in various shells as well as auto-completions for the context entities and command names.

While the console is open, any hotkeys that generate text input no longer work. Other hotkeys and mouse input are not blocked.

The console can be exited at any time using the Esc key.

Suggestions will be shown below the command-line whenever the cursor is at least one character into the context entity id or command name.

Using ↑', PageUp or Ctrl+P when the first suggestion is selected will restore the original command.

Using Tab, editing the command or moving the cursor in any way will finalize the selection and show new suggestions based on that.

If the cursor is not at the end of the line, the selected suggestion will be merged with the orignal line.

Additionally, the console is able to automatically complete the prefix that is the same for all suggestions:

Additionally, the selected entity (using mouse click) will be available for completion using Tab or Ctrl+I if the cursor is at the start of the line. This works even if there is already a command entered, in which case it will replace any existing context entity id but leave the rest of the command alone.

The console keeps a record of previously executed commands which can be browsed similar to suggestions:

Using ↓ or PageDown or Ctrl+N when the history entry is selected will restore the original command.

Using Tab, editing the command or moving the cursor in any way will finalize the selection and show new suggestions based on that.

If the cursor is not at the start of the line, only those history entries prefixed by the text before the cursor will be browsed.